SEOs are running to check their rankings after hearing about December 2020 Core Update roll out.

Some SEOs thought we might not get another core update from Google in 2020 but we did. Google has launched the December 2020 Core Update on December 3. This is the third Google core update of the 2020 year; it comes after the May 2020 core update which was released seven months ago. Historically, Google has released a Google core algorithm update every few months or so. But this time it has taken a bit longer. It seems like the COVID-19 pandemic delayed the rollout of Google’s next core algorithm update.

The Roll Out Announcement – Google tweeted announcing the December 2020 core update roll out, where Google said “Later today, we are releasing a broad core algorithm update, as we do several times per year. It is called the December 2020 Core Update. Our guidance about such updates remains as we’ve covered before.”

Later today, we are releasing a broad core algorithm update, as we do several times per year. It is called the December 2020 Core Update. Our guidance about such updates remains as we’ve covered before. Please see this blog post for more about that:https://t.co/e5ZQUAlt0G

Google December 2020 Core Update started rolling out at 1 pm ET on December 3, which is approximately two and a half hours after Google said it would roll out. As is typical with these Google core updates, the December 2020 Core Update will typically take about one to two weeks to fully roll out.” But some websites are reporting huge changes like over 30% or more in less than 24 hours since it began to roll out.

Obviously, the instant response from the SEO community to the launch of December 2020 Core Algorithm Update is anxiety and fear. Let’s have a look at some of the reactions so far:

Hmm! Let's get Ready for it 🙂 pic.twitter.com/pzV3i9ZwBw

Normally SEOs and websites owners expect the worst when it comes to Google core algorithm updates. However, these core updates are also opportunities for websites to be rewarded for their SEO efforts over the past several months. It’s especially true for the websites that are negatively impacted by previous Google core updates.

With a new core algorithm update Google will reconsider how Websites’ content should rank after the changes made to the website since the last Google core update. At the same time, websites that have been attentively working toward improving their rankings may see misfortunes. In nutshell, websites’ rankings can move around quite a bit over the coming weeks.

2. What Search Tracking Tools Are Showing? 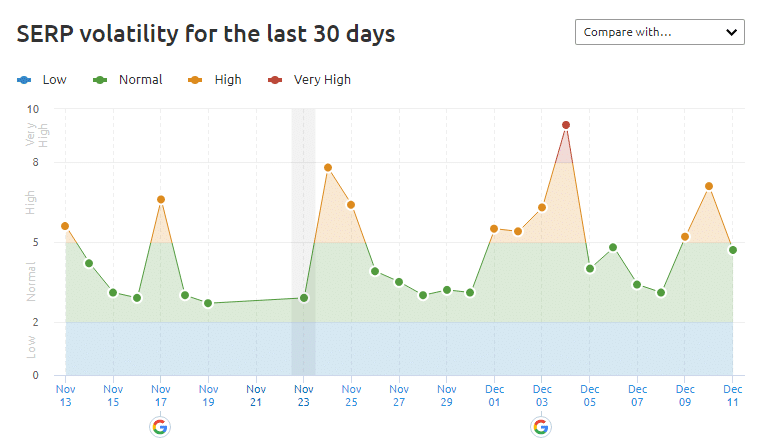 Whenever Google releases its search ranking core algorithm updates, it means that your website can do better or worse in the SERP results. Knowing when Google makes these core updates gives us the chance to monitor our websites and do the needful changes to improve our website’s ranking and performance on the SERP. Now, we know Google started rolling out its December 2020 Core Update, so keep an eye on your analytics and rankings.

We’ll need to wait to see the full impact of the December 2020 Core Update, meantime, let me know how you did with this core update so far.

Less noise with human, More love with nature to he

No matter how far is the distance, How tough is th

Celeberting the powercut with re-reading the @robi

Today role is going to be the dad, Romantic husban

Morning workout with my Replica 💪😉
#morningr

One hell of a ride 👆🌟
#hondacivic #rambodafa

This error message is only visible to WordPress admins

Error: API requests are being delayed for this account. New posts will not be retrieved.

Appointed by the @slimsrilanka & Northern Tourism bureau to train the hoteliers to upgrade their Digital, Emotional and Experience marketing skillset.

Later today, we are releasing a broad core algorithm update, as we do several times per year. It is called the December 2020 Core Update. Our guidance about such updates remains as we’ve covered before. Please see this blog post for more about that:
https://webmasters.googleblog.com/2019/08/core-updates.html

Let’s get started with the most common local SEO mistakes and how you can avoid them.